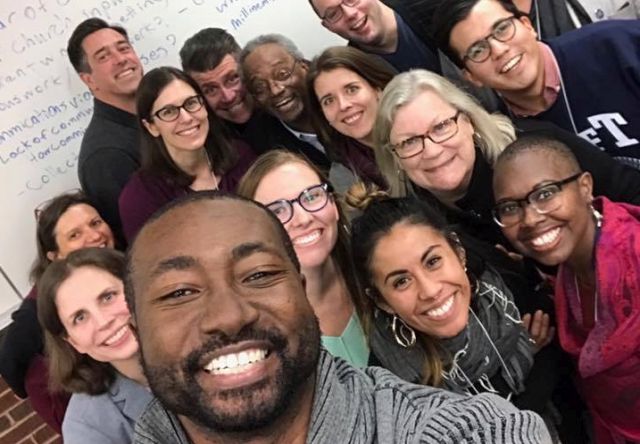 by The Rev. Ramelle McCall
I have been asked to serve on the Interim Body* addressing the State of the Church. This committee, appointed by President of the House of Deputies, Gay Jennings, has been asked to “to fulfill Resolution 2018-A053, which directs the design of a new parochial report ’relevant to the diversity of the Episcopal Church’s participation in God’s mission in the world.’ The rest of your time will be spent exploring how we can find new ways to foster the participation of all Episcopalians in that mission,” said President Jennings at our first meeting last month. “In order to receive fresh and new perspectives,” President Jennings commented, “I have appointed no Baby Boomers to this committee…” (Our oldest member is 50 yrs old).
This allowed us to begin with fresh, unique ideas and to feel less beholden to “what the Church use to be.” For three days at Maritime Institute Conference Center near Baltimore, Maryland, we brainstormed and organized our ideas based on common themes we articulated. For example, one theme we discussed was Leadership and our concerns about leadership, such as ‘How can we empower elected deputies to find their voices around legislating? We have power to change things.’ We also named ‘Power’ as a theme: ‘How do we actively dismantle systems of power in the Church that belittle, marginalize, oppress, and limit our imagination?’ Our committee realizes that turning these ideas into actions will cause some debate, but we also feel that we have been called at this time to do the work our church has asked us to do based on Resolution A053. Therefore, we do not feel micromanaged, but rather inspired to connect with younger people in our home communities and begin to create real data and solutions regarding what the Church will look like in the future. As we continue to this work within this triennium, I will keep you posted on our exciting work. Blessings!
*A term of convenience used to described the committees, commissions, boards, and agencies of the General Convention. It is not a canonically defined term. If a group was created by General Convention resolution, or if a group is constituted by Canon, Rule of Order, or Joint Rule, or if it is funded within the canonical section of the budget, then it is an Interim Body. The interim period is the time between General Conventions. The Interim Bodies of the General Convention were first listed in The Episcopal Church Annual 1997.

Andromeda Daley joined our diocesan staff in 2021. She holds a Masters of Business Administration from Le Moyne College and a Bachelor of Professional Studies in Management: Accounting from Cazenovia College. She moved to Maryland from New York in 2020 and resides in Baltimore with her fiancé Nathaniel and cat Trixie.

Chaplains serve individuals in unique situations where they are coping with the challenges and opportunities of that environment.  It is the task of the Chaplain to help them deepen their spirituality by understanding where God is in their life and hopefully, to discover meaning in the situation as presented.  The clergy, staff and lay leaders of the diocese strive to proclaim the gospel of Jesus Christ in a world where there are increasing changes in the traditional church and fewer resources. When a representative of the diocese is there to address the range of personal stressors in the areas of illness, family conflict, finances or the inevitable changes brought about by the reasons stated above, the dedicated clergy, staff and lay leaders feel that their efforts are recognized. As with any large caring family, a crisis seems less daunting when you know you are not alone.

As a chaplain, Joanna seeks to help individuals to find deeper meaning in both the joyful and challenging aspects of their lives. While that sometimes requires extensive work one to one or with families, there are even more instances where a cup of coffee, a willing presence and a shared laugh are needed. Joanna looks forward to creating a program around caring for the caretakers and opening avenues of communication among clergy and staff to share experiences and resources.